“Tracing the edges of consciousness” is how the current exhibition at the Wellcome Collection is badged. It is the first time I have visited and was immediately incredibly impressed by the building, the great cafe, and all of the very informative displays open to the public. The States of Mind show looks at different aspects of consciousness and how we, as scientists, philosophers, artists and poets, have asked so many unanswerable questions over the centuries.

“Science still struggles to describe how the subjective experience of consciousness arises out of the objective tissue of a human brain…however, it is within this space that the range of individual experience exists”

The show itself was interesting and thought provoking, at times uncomfortable. A few key things jumped out in relevance to my work. The first was the discussion of science and the soul – the classical mind/body argument. As I have discussed before on this blog, the mind/body dualism essentially requires the separation of the physical world and the separate internal world of private experience. I realised that this is the barrier I am seeking to remove with my MA installation – a way to create a space which exists simultaneously in the physical world and the world of my own private experiences, allowing the outside observer a glimpsed encounter with my own concept of self.

The second exhibit which stood out for me was that on language and memory as tools for conscious selfhood. Language and memory are tools which facilitate the relationship between our internal and external worlds. “Language allows us to communicate with each other – and to share our subjective experiences. We can also talk to ourselves , and identify ourselves.”. The series of work Post-Partum Document by Mary Kelly examined the emergence of self and was in my view the most poignant in the show. 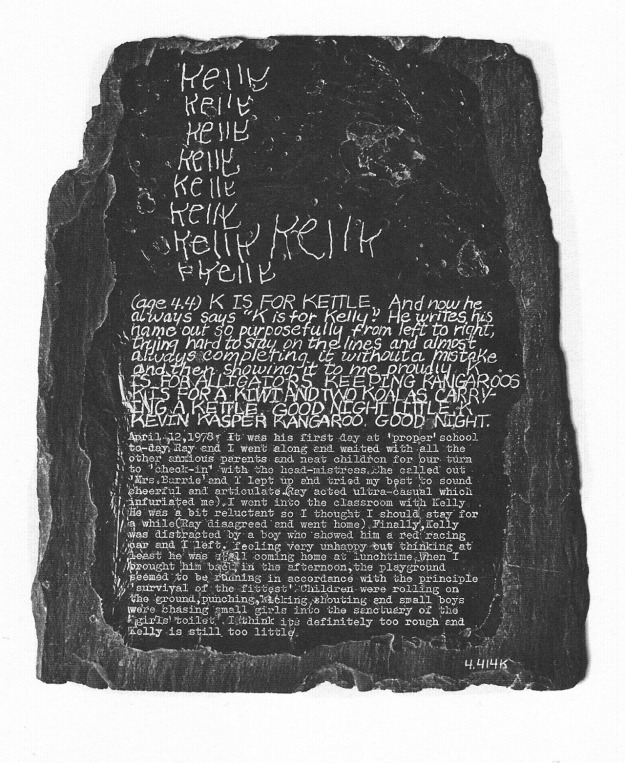 I have spent much of the last year (since before the Unit 1 assessment) tackling the challenge of how to include my interest in working with text/words into my practice. I realise now that if I am to be realistic, the real core of my “practice” has always been the words – the stuff in my sketchbooks are so often poems or calligraphic drawings, the expressionism. This is after all even what my last few art quilts were about. I have perhaps been trying to overlay some ability to work in 3D or objects, without really comprehending what the foundations of my own work were.

So if we look a the picture the other way around…if the words are the core thing, how then can other material or 3d design help express my concept?

I have been looking at the construction of a place identity, trying to express a sort of visual poem as a manifest object. My plan for the installation is to make it a real, immersive space which overlays a physical form of personal experience combined with a seemingly endless stream of consciousness poetry – offering a manifestation of my personal conception of my sense of self.

The key material for my piece is then really the words themselves – using the materiality of the physical act of handwriting, the work becomes both a visual poem and calligraphic record.  Handwriting is a raw, immediate and visceral expression of your core identity – something which is original and unique to yourself. 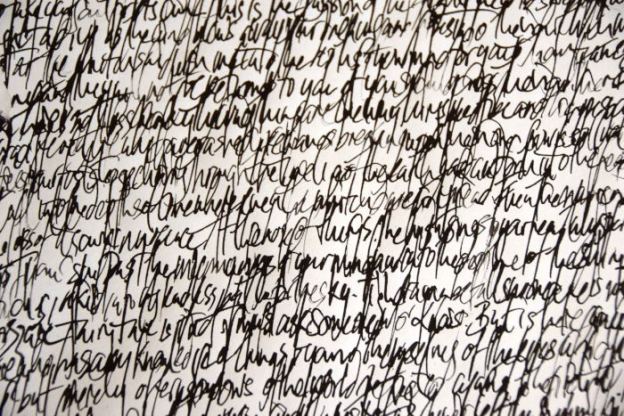 My poem for today:

I am the Wordsmith, the keeper of keys
My name is carved into the heart of the world
With wind and water I craft dreams and desire
Bringing green to the summer lands
My words shake the skies and warp the earth
Twisting reality into infinite reflections of itself

I am the Wordsmith, awakened in darkness
My name is whispered in shadow
With fire and stone I bring chaos and pain
The night’s melody sung out across the sky
My words shatter the black into shimmering pearls
So to begin again the dance of the stars

I found this fascinating article on the history of of string based-art works, which talked through a lot of the reference artists I have found on my travels, and a few new ones as well.

Starting from the sculptural works of Henry Moore and Barbara Hepworth with threaded string, resembling mathematical structures, and possible influencer Naum Gabo. Looking back at this, I notice that so much sculpture involving string is exploring geometry in nature, very little of it appears to be on a more conceptual basis. The installation is ore suited to this nature of art I believe. Once you start adding more complex craft to the work – weaving, basketry, embroidery, knitting and so on, you add layers and layers of more narratives which are based on the process and not the concept. Which is fine if that is the core of your work. However, I have never wanted to make statements about subverting a craft tradition, nor do I want my piece to comment on ‘domesticity and feminine arts’ which is what so many articles on textile/fibre work seem to do. So this brings me firmly out of the idea of making an object (bye bye map weaving) and firmly into contemporary installation territory.

The article, progressing onwards, takes us to the Minimalist string installations / sculptures of Fred Sandback. 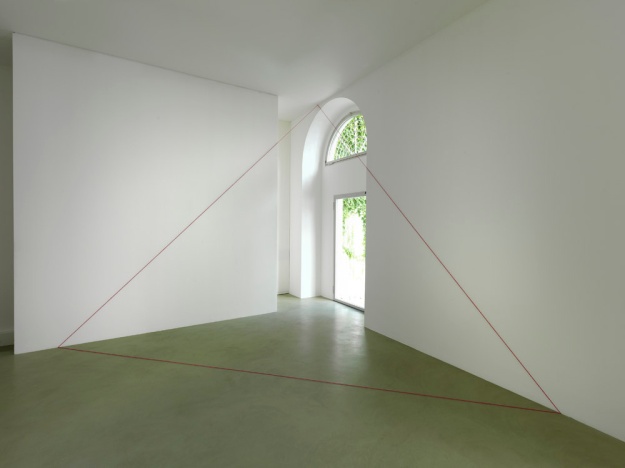 His work used single strands of yarn from point to point to create precise geometric figures. This was of bifurcating three-dimensional space, these “intangible objects” became a meditation on the pictorial plane and architectural volumes. With this work I noticed the strength of simplicity that can construct a separate architectural space within a larger space. Comparing this to the massive complexity of works by other architectural influenced artists, such as Tomas Saraceno (pic below), I much more align myself with the more Minimalist approach.

Galaxy Forming along Filaments, like Droplets along the Strands of a Spider’s Web 2009

I am not however, making a pure geometric space, as this would be too much of an exploration of abstract spatiality. In the same way that my hope to use psychogeography as the core of my process roots the work too much into a specific locality. I want my work to be about both the here and there, while being firmly neither.

As I write this, I remind myself of what I had originally written in my project proposal, final version submitted back in November about creating a heterotopia, a placeless place: a real place which exists simultaneously outside of all places, neither here nor there. This is the effect I can create with an installation – which I am now firmly set on making large scale – and using it to construct a heterotopic space which manifests a physical, personal conception of my sense of self:

I am this place. I am no place.

Having played a little more with the projection mapping, working directly onto my threads, I am not convinced it is doing what I want it to do. Although I like the idea of my writing being dynamic, I don’t want to be constrained into making a thread ‘wall’ just to have a solid enough surface for the words to show up on. So I had a look at what other options there may be for getting my poems materially into my work using the same principles.

I came back to Morley’s book, Writing on the Wall, and revisited the idea of literally doing that – writing on the wall. With a pen. There are precedents for this, with for example, artists such as Fiona Banner: 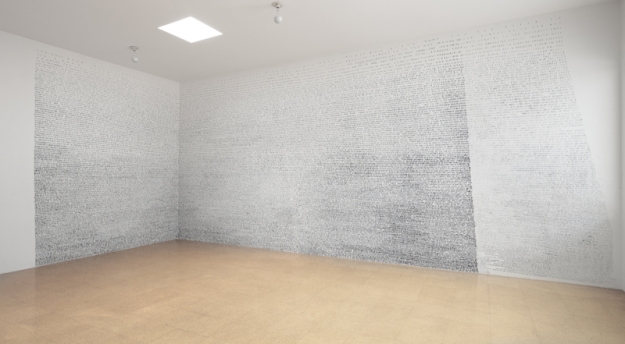 My question remains though how to integrate the threads with the words. Perhaps having the handwritten poems revealed at the heart of the thread installation (written or displayed on the wall?). They will then offer my personal fiction – what impressions and imaginations can be discerned from life’s experiences – into the less subjective expression of place through the map yarn. I am happy to have the poems legible, because (as anyone who has read my stream of consciousness poetry can tell you) it won’t offer much help as to what the piece means.

My current best description is this: the installation itself will be a physical experience (big enough to walk through) offering a moment to seek an encounter with yourself. The installation will be created to reflect my personal identity through my choice of form and the places which I consciously choose as a representation of my sense of self. You can walk in to it so that I can say to you, this is my world.

My poem for today for good measure:

I lost my way in self-defence,
but panicked, and decided to find it again.
I was watching the road winding onward, but took the long way round.
There is no centre to anything
so I just fell out on the other side.
Why am I always here?
I should not have come here looking for any part of myself.
Cut the apple, says the witch, and find the sacred star
You’ll have forgotten again by morning.

I have had notes on this technique in my research folder since October 2014 – so it is with a little amusement that I finally get to dig them out now. I had originally been playing with the idea of lighting (before getting put off working in ceramics), where I wanted to project patterns onto the inside of paperclay tubes. This idea went nowhere, but it meant this long planted seed was already in place before coming across the projection mapping of poetry from last week’s blog.

I have followed this up a little more, and found some interesting examples of projection mapping onto sculpture – although this seems much less common than using stacks of weird shaped boxes, or projection onto large buildings. This example is pretty stunning:

The piece was created by creative agency Blow Factory and the woodwork was done by Caprinteria Tabares. What’s great about this is how the projection mapping exploits the wood grain and surface texture, resulting in beautiful movement of light and pattern.

So, to test this I have to work in a few stages – firstly, figure out how projection mapping works, then see how to animate my own calligraphy into video, and thirdly (and not insignificantly) decide upon the installation of threads to project onto…so, one thing at a time!

This was a basic test of the two techniques in my home studio using some open source software I found online (you can’t see in this still, but the handwriting is in fact animated) 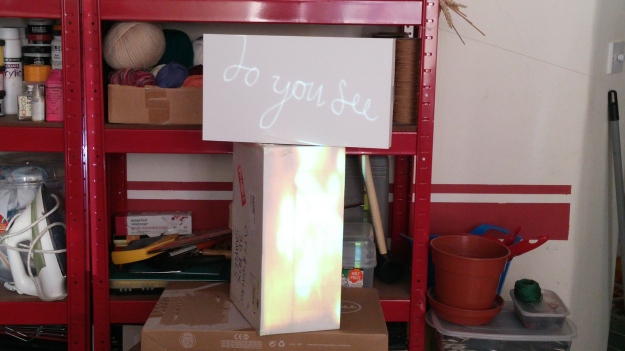 I did a few tests with projecting the images and words onto the threads. However, in order to get this to work, I need to manage the fact that they are….well, threads. As there are gaps between them, the projections will only be seen where there is more density or a solid surface, particularly if it is text. Now that I know I can handle the basics of the technique, the next task I think is to be sure I know what I want the threads to be like/represent before moving on.

The big question, before I get too deep to turn back, is this the right thing for the show?