We were offered a last minute spot in Camberwell space to hold an impromptu pop-up show. All hands on deck to get things up and ready in around three days! As the college aren’t holding a formal interim show this year, we made the pop-up about experiments and test pieces for all of the first and second years’ ongoing work.

It was great experience of how to get a show ready and some of the things we will need to consider for the final show when it comes – curation is new to most of us, but it is an eye opener to see how different objects say quite different things when placed next to certain objects. After having a few weeks struggling with progress, I was pleased that one of my later experiments with the silk paper was good enough to show. I wanted to suspend it over the table, but in the short time we didn’t manage to find a way to hang it. A lesson on time needed for planning for the next show! A couple of days of display, some good feedback on the show in the black book, and then it was all over. This was us setting up the final arrangement: 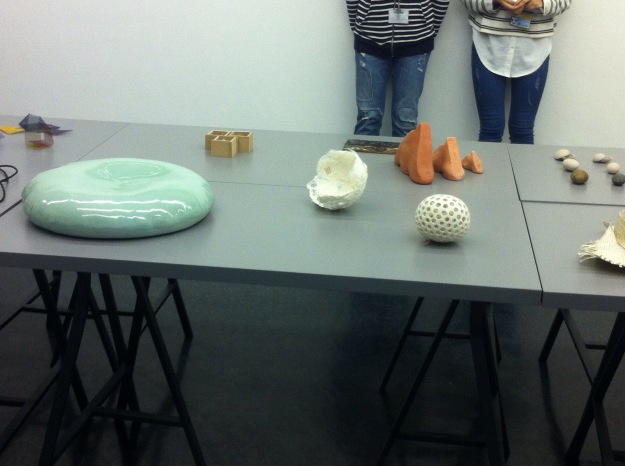 and finally, a close up of my piece, an experiment with silk paper titled, the unwatched moon.

Almost a week has passed since the series of unfortunate events which plagued last week. I have spent all that time trying not to think (something surprisingly difficult) and get in touch with the real things which inspire me.

It was the visiting tutor, Barnaby, who asked some of the most directed and crucial questions of anyone I’ve met in College so far; what is it which drives all of your creativity? What truly inspires you in the things you read, the photos you take or the things you do from the moment you get out of bed?What defines you as an artist?

Well, this has been the core of what I have been trying to answer since I started, at the same time as trying to “meet the needs of the course” and unfortunately have ended up with a chasm of disconnect between the two. I have decided not to quit, and to continue on the course – primarily because I have learnt so much and (despair and confusion aside), I think I have come a long way in a very short time. I like the professional critique you can get in this environment and exposure to cross-disciplinary ideas. But from now on, I am going to work from my own art first and not from what I think I need to do to pass the MA.

So to the next steps. I am going to redraft my proposal from a blank page, working with my inspirations first – and figuring out my question later. One of the tutors once said that “we like obsessions”, so i thought I would start there – with the visual imagery from nature, books and film which surround me at home (and in some cases everywhere else too). This brings me to two key things: the magic of nature and Moomin-mindedness.

I woke up in the middle of the night with a realisation that this was the place I started back in September….do you remember this photo from the narrative workshop? Bringing in two objects which meant something significant to you? A Moomin mug and my Morris dancing hat – a good omen I hope. 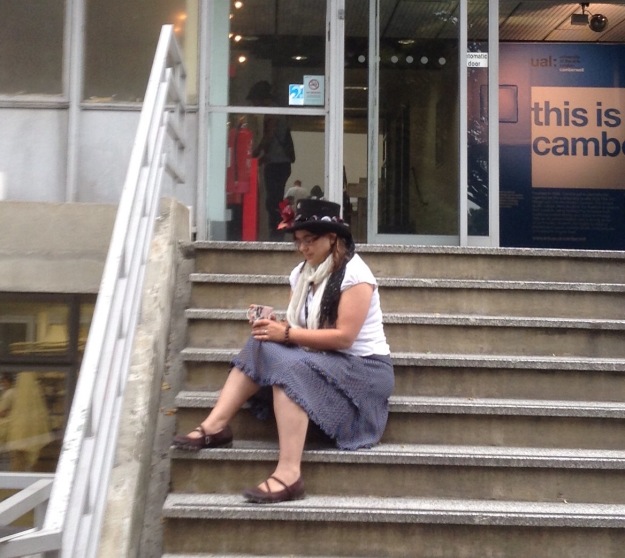 Much work to do then to find my question in amongst my existing inspirations, and see how this relates to objects and making them. As a starting point I am going to work from the piece I made for the pop-up exhibition this week (blog on this coming soon). This was titled The unwatched moon, as a comment on society’s losing touch with nature in the modern world. I want to look at more at this as a topic: overlooked beauty in the modern city, natural magic losing its foothold in people’s hearts and minds. As a final outcome, I am aiming for a mixture of two and three dimensional fibre works, stitched textile art and fibre sculpture perhaps. I’m not bothered about functionality, but would like the materials to also speak of being ‘overlooked’. This fits in with what I thought about using the silk waste fibres for the moon sculpture. Not sure about a new context yet, will work on it.

Overall, I think I’m now in a much better place…now, back to work!