“Tracing the edges of consciousness” is how the current exhibition at the Wellcome Collection is badged. It is the first time I have visited and was immediately incredibly impressed by the building, the great cafe, and all of the very informative displays open to the public. The States of Mind show looks at different aspects of consciousness and how we, as scientists, philosophers, artists and poets, have asked so many unanswerable questions over the centuries.

“Science still struggles to describe how the subjective experience of consciousness arises out of the objective tissue of a human brain…however, it is within this space that the range of individual experience exists”

The show itself was interesting and thought provoking, at times uncomfortable. A few key things jumped out in relevance to my work. The first was the discussion of science and the soul – the classical mind/body argument. As I have discussed before on this blog, the mind/body dualism essentially requires the separation of the physical world and the separate internal world of private experience. I realised that this is the barrier I am seeking to remove with my MA installation – a way to create a space which exists simultaneously in the physical world and the world of my own private experiences, allowing the outside observer a glimpsed encounter with my own concept of self.

The second exhibit which stood out for me was that on language and memory as tools for conscious selfhood. Language and memory are tools which facilitate the relationship between our internal and external worlds. “Language allows us to communicate with each other – and to share our subjective experiences. We can also talk to ourselves , and identify ourselves.”. The series of work Post-Partum Document by Mary Kelly examined the emergence of self and was in my view the most poignant in the show.

Imagine for a moment, that you are out walking in the hills. It has been raining hard all day and you decide to rest in the entrance of a small cave to escape from the rain. You light a small fire and sit near it a safe distance away. The warmth is comforting and other than the fire, the cave is in darkness. Tiredness overcomes you and soon you are asleep. You awake suddenly and see the light of the flames flickering on the cave wall. In the flames are pictures and images dancing across the walls. Are you still sleeping? Are the images real? If they are just in your imagination, then are they any less real just because they are in your head? If they are real, are they just shadows, or are they being made by something outside of your perception that you cannot see? How would you ever know which is true?

This scenario, is a thought experiment which I have based on Plato’s Allegory of the Cave, which essentially describes how we cannot know the truth of reality. What is real may be invisible to us if we are trapped within our own plane – a 2D shadow made by a 3D object you cannot see. I think this is true not only of our physical known universe but the internal workings of our consciousness – which, even in this age of information is still a vast frontier in modern science. If the universe has 11 dimensions, or there are other universes entirely out floating the void, how would they connect with us – would they project shadows onto our own visible 4 dimensions? What would a 11D shadow look like? Does our brain see flickers of the unknown as we stare into the darkness of the future? How does our consciousness interact with our subconscious mind? Does it also offer us shadows of truth flickering upon our mind?

This, fundamentally is the premise of my project proposal, currently in divergent stage as opposed to narrowing down my specific question just yet. I have been working on visualising these concepts for next week’s Getting Making workshop 4 – which I think is the final workshop in the series. I’ve made some objects representing different aspects of this to present to the class on Wednesday. We need to do 6 objects in all, and these are glimpses of three of them finished so far. 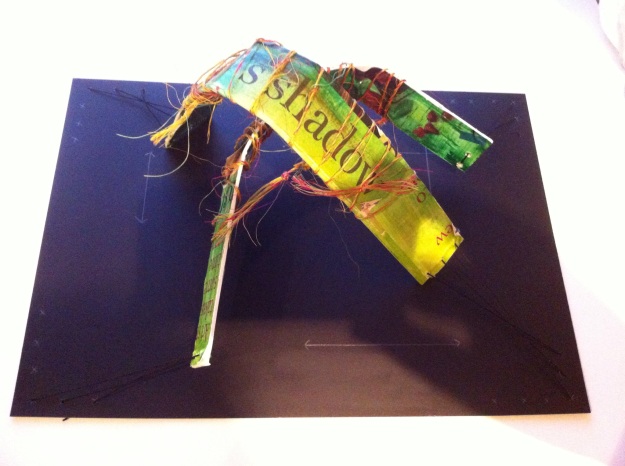