Intriguing title….I came across this very interesting article in the Journal of Illustration, by Alexa Galea.

An introduction to the article in IQ magazine includes the following summary:

“It appears that for the last five hundred years or so, British folklore and folk art has been subject to rather bad press. Whether such practices are considered peculiar, entertaining or simply so far removed from today’s urbanised culture, there is a recurring theme that often associates Britain’s folk traditions with a darker side. In her article, Alexa Galea explores these traditions and attempts to uncover why such horrific connotations exist.

The popularity of British folk art hasn’t seemed to diminish in recent years. In fact, traditional art forms are flourishing in the contemporary consumer market. The British visual artist Rob Ryan’s paper-cut inspired products continue to generate great appeal whilst the original craft’s popularity seemed to have peaked back in the eighteenth century. Even the craft of corn dollies playfully popped up in Alexander McQueen’s spring/summer 2011 fashion show. However, British folk art has been forced to fight a continuous battle to retain a foothold in British culture….Despite the past popularity of such objects the undertones of these traditional crafts, and indeed many folk rituals, remain clouded. It is perhaps through the lack of understanding of the origins and meanings of these traditions that dark connotations are formed….there is an implicit assumption that the reader already thinks rural British life and folk tradition is old and weird…This is reflected in the common lack of knowledge in Britain regarding many British folk traditions…which continue to be little known and little celebrated, and are often at best greeted with bewilderment. 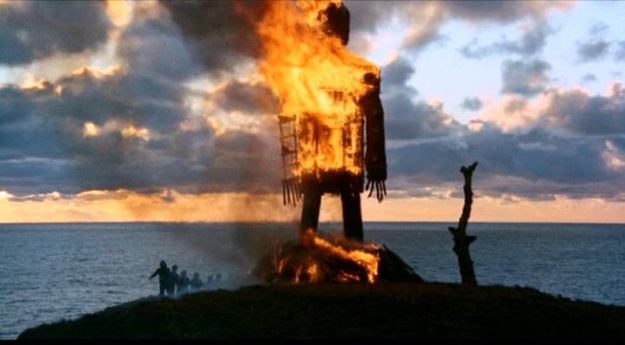 The Wicker Man (1973) successfully looks through the original meanings of folk traditions by grasping hold of evident aspects of horror. As a result, by building upon existing prejudices, this major piece of popular culture has filtered its biases to influence societies perception of British folk. As Galea concludes:

My investigation into the dialogue between the conflicting images of British folk art and ritual as a picturesque and frivolous parade of craft and gesture; and one of an unpleasant, horrific and morally corrupting practice reveals a relationship of oppression and resistance; and a fundamental fear of the significance and meaning of folk artefacts and ceremonies. Folk art and ritual occupies a dual position within British culture, and although residual, is bound up with the dominant culture it permeates.”

The full article is a fascinating read. I find this a very interesting point of view, and as a Morris Dancer with a strong interest in old traditions have seen this myself first hand. Rude comments, odd looks, even the occasional profanity thrown at us while dancing in the streets. Even when Morris dancing was first seen across the country it was perceived as a subversive act, with communities in much fear of a widely misunderstood pagan past that they believed was being propagated through dancing. Not much has changed.

Our cultural anthropology has such a strong impact in how we interpret what we see. Folk art and ritual are an expression of deeply held beliefs and our connection with the world around us in its natural ever-turning cycles. This is something which is being lost as we become ever more urbanised as a society. Some argue that this is an inevitable fact of modernisation (who shows a vision of the future where we reap our own corn?). However, I among many others, don’t believe in inevitablity, and think that a future where we lose contact with our past, our environment and our balance, cannot be a good thing.