I have been looking into the work of contemporary basket weavers, initially to see what people do with willow as a material, and see who resonates with me – both as inspiration and also as new references for my project proposal. I have also been keeping an eye on how these artists create their form – what inspires them, how do they decide on the form? I think now that I have begun to understand the ideas of materiality, grasping how I can develop form is my next target.

I am fascinated by Lizzie’s work – the forms appeal to me a lot. Her statement tells that she has “a fascination with living things and natural form. For me, willow has become a medium for an interaction with nature that is deeply personal….my work ranges form traditional to organic sculptural forms”. I also noticed with interest she calls herself artist / designer / maker. These photos were of my favourites. I particularly liked the site-based one below, called ‘spirit of air’. 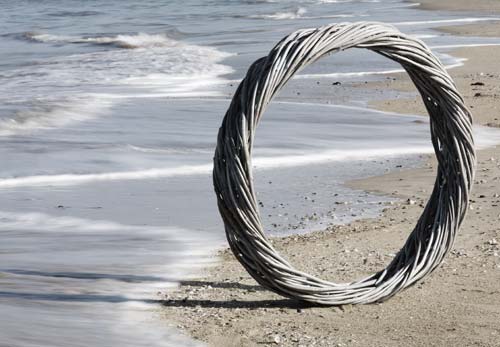 Lewis doesn’t generally work with willow, but I spotted his work and he works with ideas of identity and place. I noticed immediately that his statement sounds like my essay!: “The significance of place in our lives is central to my work. The textures, materials and processes of textiles allow me to explore ideas about landscape, identity and belonging…The time I spend attentive to landscape translates into process and the labor of making. Images are created thread-by-thread, line-by-line, so that my work can be viewed as landscaped textures that are naturally created, blade-by-blade, leaf-by-leaf”.

Her work uses natural materials and is strongly influenced by natural forms, containment, growth and movement. Materials used include: stone, clay, chalk, willow, poplar, birch, hazel, and dogwood stems, leaves and wood. She also notes that she has been making work “in response to the craft of charcoal burning and my auto­biographical journey in relation to walking the land and the memory of place”.

Joe’s work is strongly influenced by the landscape of Connemara, where he lives and works. His robust, increasingly sculptural pieces are woven from native willow, and often incorporate twisted bog wood – reminiscent of bleached horns or antlers – from an area of bogland near his home. They are strong, physical pieces with a raw beauty. I also quite like the traditional baskets he makes as well.

Tim has a fascinating website with a wide range of stuff he does. He seems to make baskets out of everything (from willow to rushes to grasses) and all over the world. Here were a couple of my favourites. I particularly like the idea of the ‘woven paths’ (first photo) and wonder if I can make something inspired by this – it completely resonates with my desire line concept I think.